Warning
Our new website is optimized for the most current web browsing technology. If you are using an older web browser, part of our website may not function properly as designed. Please consider upgrading your browser for an error free experience.

by Darryl Anderson
09th October 2014
BACK

Recently, a client came to us with an idea for a short educational video to explain a complex idea. It was to debut at a professional conference with thousands of delegates, many who had limited or no understanding of English.

Video is an ideal medium for cross-cultural education, and our professional production for the National Blood Authority in Canberra is a great example of a very effective explainer video.

In early 2014, the National Blood Authority launched its MyABDR online tool (smartphone app and website) for people or their carers to record home treatments and bleeds for bleeding disorders, such as Haemophilia A, Haemophilia B and von Willebrand Disease. There are some 5800 patients on the Australian Bleeding Disorders Registry (ABDR), and MyABDR aims to simplify their record keeping and blood product management. It also has the potential to be deployed by blood administrations overseas.

Our brief was to produce a very short animated video (1–2 minutes) for the National Blood Authority to display on its exhibition stand at a large professional conference.

Executive Director, Peter O’Halloran, recalled his experience with us on the project.

“We knew we’d have 5000 delegates walking past us—including a number who didn’t speak English at all—so we needed to get our message across quickly and comfortably,” Peter said.

“An educational video provided a way for us to reach our target audience, to explain a fairly complex topic quickly and easily in a way that really engaged users.”

Like many of Anvil Media’s newer clients, the National Blood Authority initially discovered us through an internet search. After reading about our team and our projects, Peter approached us with a fairly good project brief.

“We selected Anvil Media based on two things,” Peter said.

“The second was their realistic quotation that spelt out the full detail. It wasn’t full of the usual pitch that people put into procurement, which gave us the confidence that they actually knew what they were doing.”

Fortunately for us, the people at the National Blood Authority had really done their homework. While this was the first education video they had produced, they had prepared a detailed brief and even drafted a potential script. Anvil Media couldn’t have achieved what we did in such a short timeframe without this great starting point.

After initial discussions via telephone and email, we met with Peter to present a few concepts.

“They had read our brief and read our proposed script—had really thought about it—and came with both questions and a couple of potentially good things that could work with it. ‘How did we feel about this or that?’ And so forth,” Peter said.

“We found that a really good process.”

But like all creative processes, this wasn’t without its challenges.

First, it was a very short project from start to finish. The video had to be completed in 4–5 weeks, in time for an international conference.

Second, the client was underwhelmed with our first version!

“The first cut didn’t make us feel overly happy; we didn’t think it would engage some of our intended audiences,” Peter recalled.

“We spoke to the Anvil Media team and they completely turned it on its head; 3 or 4 days later, I actually had a new concept that worked perfectly.

“What’s more, the video was completed within budget and timeline, which we wouldn’t have achieved with traditional media.” 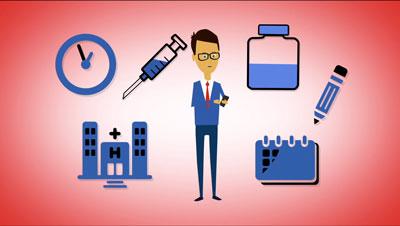 The video was presented at the conference, and continues to be used by the National Blood Authority in its work to assist people with bleeding disorders and their carers. It’s also been played at community education sessions and stakeholder meetings.

“Since the conference, we’ve used the video on our website, and it’s received rave reviews from the community members that we work with.”

Peter summed up his experience with Anvil Media as “a pleasure”.

“We came into it with a very short timeframe and a limited budget, but also some fairly strong expectations of what we wanted in terms of quality and timing and so forth, and they delivered it all flawlessly,” he said.

“There were some issues where we didn’t like the direction they had gone with the style of the animation; we raised it with them—I think we had more angst about whether to say it was a problem than they did—and they were quite happy to turn it all on its head with almost no notice.

“It really was a pleasant and painless experience.”

If you are considering an audio-visual production to promote your product or service, contact us on 1300 768 101 (local call rate) or [email protected] to discuss your explainer video ideas.

… or complete an enquiry form now.